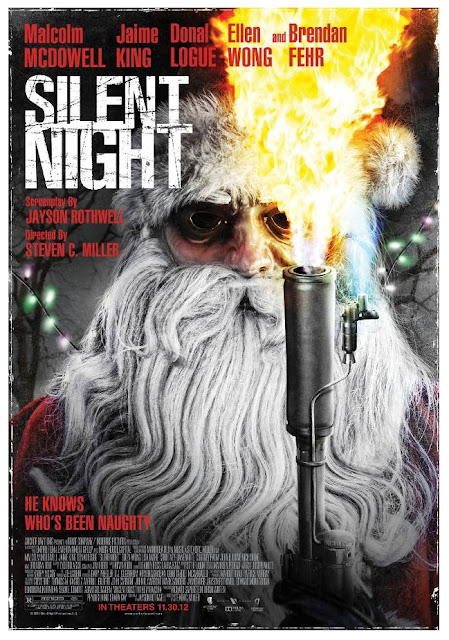 
Plot: A serial killer Santa is on the loose in a small Midwest town picking off citizens on Christmas Eve and it’s down to the local police force to track him down before it’s too late.

Review:  A remake of sorts of the classic festive slasher “Silent Night Deadly Night” which unlike the original seemingly slipped under the radar for most horror fans, no doubt thanks to its direct to DVD release which inturn mean that it avoided any of the controversy that the original film was greeted with. This of course makes it only the more of a shame as this is one of those great rarities a decent horror remake!
It’s worth pointing out that going into this one I had no idea that it was actually a remake, happy to see another Santa Slasher and it only dawned on me after several scenes came off more than a little familiar. At the same time here director Steven C. Miller is clearly keen not to just remake the original shot for shot and here instead gives us an original plot and throws in fun nods to the original when he can. While largely successful it does however mean that the references range from clever such as a sheriff commenting about it being “Garbage Day” to slightly more clumsy as seen with his attempts to work in the catatonic creepy grandpa which comes off misplaced with the scene feeling like it has been forced in especially when unlike the original it has no importance to the plot in the slightest.
While the original focused on the psychologically damaged Billy and the events leading up to his psychotic breakdown, here it’s a much more straightforward story and inturn meaning that the film wastes little time before our killer sets to work as we open to him using his home made electric chair on one of his victims after the great opening sequence showing him assembling his Santa suit. From here it essentially a chain of ever more inventive kills while Aubrey (King) tries to track him down which is no easy task when the town is full of Santa’s for the annual Christmas parade. Even with the killer in the towns midst it soon becomes apparent that he’s not the only crazy in town as we also get the drunk and bitter Santa Jim played here by the continually underrated Donal Logue and who here provides a fun red herring.
While the original spent its time building up the background of Billy and trying to explain how he ends up going on his murderous rampage, here such things are much more of an afterthought with Miller much keener to rack up the creative kills and keep the film moving at a brisk pace than explain why his killer is doing what they are doing. As such when we do finally get an explanation its feels like much more of an afterthought and thanks to its placement in the film as an epilogue of sorts feels clumsier than if it had it been placed in a more prominent position.  On the flip side the kills here are truly inventive as the killer proves himself more than capable with his axe while getting equally creative with a string of Christmas lights and more memorably a flamethrower while the real standout death comes via the use of a woodchipper
While the kills are all surprisingly good it’s equally surprising to see the film shot like an 80’s slasher as we get a healthy dose of gore and splatter, let alone gratuitous nudity which seems to equally be as much a rarity in modern horror as old school splatter and here its used in such a way that it adds to the film rather than feeling exploitive. Again it’s a credit to Miller that he also shies away from reproducing any of the classic kills from the original outside of a girl being impaled in a pair of antlers, though if only one kill was to be carried across I kind of would have preferred for it to have been the sled decapitation which is sadly absent here
Unquestionably it’s a great cast which Miller has assembled here with Malcom McDowell chewing the scenery as the town sheriff while getting the best line of the film when he belittles the killer for bringing “a flamethrower to a gun fight”. Equally on good form is Jaime King who here makes her third appearance in a horror remake, having previously appeared in the remakes of both “My Bloody Valentine” and “Mother’s Day” and here proves herself a great final girl as the deputy determined to learn the identity of the killer with whom they she might share more of a link with than first seems.


While it might be remake here Miller really has crafted a film which stands on its own merits, giving the fans of the festive slasher another film to add to their collection, though by the same quality it’s doubtful that none horror films will find much here to hold their attention, especially as its not trying to be meta or break the mould but this is one which is worth giving a watch even with the horror remake stigma, though it will no doubt leave you wishing that more of horror remakes were like it.
Posted by Elwood Jones at 05:49