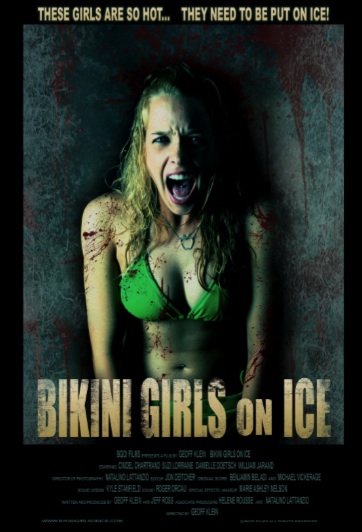 Plot: A bus load of bikini clad ladies are on their way to a car-wash fundraiser, when their bus breaks down in front of an abandoned gas station located on the edge of town, unaware that it is home to a homicidal mechanic called Moe (Jarand)

Review: I should really know by now that any film with the word “Bikini” in the title is often going to be far from the fun times and cheap thrills which the name would misleadingly give you the impression of. Needless to say this film is no exception to this rule.

A Canadian production from first time director Klein, who also is credited with co-producing aswell as co-writing this with fellow first timer Jeff Ross who thankfully gave up on the writing after this film, which like so many of the cast remains his sole IMDB credit. Still while aiming for a cheap and fun slasher, only one of these goals is really achieved (no prizes for guessing which one they achieve).

Plot wise this one does exactly what it says on the tin, unless you’re the sort of person brought up with holiday themed ice capades shows and have entered into it expecting to see a bunch of ice skating ladies in bikinis, you might be slightly disappointed to find that it’s yet another cheapie slasher abet one with a fun title, but still sadly little else to offer.


For some reason only known to Klein, the girls have seemingly only packed their bikini’s and while it’s a cheap thrill to have a movie full of attractive young actresses wearing pretty much nothing for the whole film, it’s a thrill which soon grows old way to quick, while towards the end even pushing the boundaries of plausibility as the girls run around in the dark, giving not even a passing thought to putting on more clothes. I don’t know perhaps Canadian girls are impervious to the cold, but Klein’s determination it would seem to get as much flesh on the screen as possible only took me out of the film, which by this point was struggling to keep what was left of my attention and something really also not helped by the fact that it’s nigh impossible most of the time to see what is happening during these night time scenes.

Such cheap titillation also extends to the cast, whose characters are left largely undeveloped except when it comes to what cheap thrill they happen to bring to the film (I.E: The slutty chick, the lesbians etc) and as such are largely disposable and there to make up the body count and as such it makes it really hard to care about what happens to any of them, especially when they are so interchangeable from each other. Still working with a cast of unknowns it soon becomes clear that many of them might have been hired for how good they look, rather than their acting ability but when some of them struggle to convincingly wash a car you know the film is in trouble.

The films psycho is beyond laughable, with Jarand clearly having delusions of being the next big slasher, especially from how he tries and fails to imitate Kane Hodder’s raging bull style, he brought to Friday the 13th series from Part 7 – Jason X. Still looking like one of those deranged fans that generally turn up in videos for bands like “Slipknot”, with his greasy long hair permanently hanging over his face while contorting his face into a demented looking frown, as he comes across like the embodiment of every bad slasher cliché going. If this wasn’t bad enough, he is also lumbered with no kind of motive for his actions, so we never find out his motive for killing let alone why he is so obsessed with putting bodies into tubs of ice.

The other major failing of this film is with the gore quota which despite the films high body count is almost non existent. True we get a lot of violence with Moe swinging, hammering and stabbing away at his victims, but at the same time we don’t get to see any form of pay off, as Klein opts to keep the gore off screen and as such gives zero weight to any of the deaths, while only making Moe all the more of a laughable psycho, especially when every kill is the same as the last, with the victim stumbling into him, before falling over before he sets about doing his thing, with none of the victims providing anything resembling much of a fight. Still when we do see the aftermath of any of these kills, the damage is interchangeable with any other kill in the film, with the victim looking the same as before just now covered with buckets of fake blood, with the sole difference being the occasional slit throat. It’s this form of filming which really irks me, for on one hand Klein is trying to homage the splatter and violence of the 80’s slashers, yet at the same time under the delusion of what your not seeing is scarier, which arguably might be true and you really only need to look at the likes of “Psycho” for further proof. However this style really only works well in the hands of a master director, which it’s safe to say that Klein is not and hence is left with a bunch of weak death scenes, many of which have been done before only a lot better.

Despite having a short run time, this film still feels a lot longer than it is, which when you consider that it’s a film packed with scantily clad ladies only makes it much more worrying as it takes a real talent to make such a prospect as painful a viewing experience as Klein as here. Now normally I would recommend that movies this bad, are best enjoyed with a few cold beers, but considering the amount of alcohol required to make this a fun experience, I think you’d be best also packing a spare liver in the cooler, as it fails on even the most basic of levels, while proving once more that wall to wall cleavage does not make a movie, though perhaps more worrying is the fact that this film has spawned a sequel "Pin-up Dolls on Ice", though can't say that i'm going to be exactly rushing to see it anytime soon.
Posted by Elwood Jones at 14:40