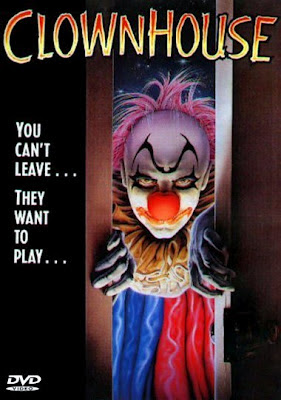 Plot: Casey (Winters) has an intense fear of clowns, which is only increased by his older brothers Geoffry (McHugh) and Randy (Rockwell) who continually play on this fear. Unluckily for Casey three escaped mental patients have murdered some travelling clowns and stolen their identity and now they are heading for the boys house.


Review: Funded by the legendary director Francis Ford Coppola after seeing director Salva’s early film “Something In The Basement”, it would mark the start of a working relationship between the two which continues even now. “Clownhouse” would be Salva's breakout film, while also being another film from my childhood, which like “Xtro 2” stuck with me after seeing the trailer as an impressionable youth, though it’s taken me until now to actually get around to watching it. It’s also safe to say its trailer really stuck with me for one reason or another over the years, in particular the dummy in the noose shown blowing in the wind. A simple yet strangely effective image, especially as it burned its way into my mind to the point were I still remembered it years later.

Right from the start it’s clear that the brothers don’t exactly have the closest of relationships, especially as they spend all their time picking on each other, with the younger brother Casey frequently being the target of these attacks. Still no doubt due to the fact that there are seemingly no other kids in the local area or any other people for that matter seeing how the only other people we see outside of the scenes set at the circus is their mum and the folks who run the local store, the boys despite their lack of sibling love for each other still spend all their time hanging out together. The boys themselves are largely undeveloped, with each of them only being given the most minimal amount of characterisation to set them apart from each other. So hence Casey is permanently neurotic and spends the film whining and crying constantly, Randy is the token arsehole brother, clearly ticked off with having to deal with Casey’s issues and frequently takes out this frustration on both Casey and Geoffrey at any given opportunity. Lastly we have Geoffrey who has taken it upon himself to stick up for Casey, though it’s left to the audience to question exactly why when Casey is so painfully annoying with his various issues. Sadly his irritancy is only heightened after he receives a prediction of his early death by possibly the most creepy sideshow fortune teller (Belsky) ever, but then you have to wonder what sort of Circus hires a fortune teller who tells their clientele that their future holds an early death!?!

Released at the end of the 80’s which have now become renown as a golden age for slashers, especially for producing slashers heavy on gore and gratuitous nudity, making this film all the more noteworthy for not featuring either and instead is shot in a similar style to John Carpenter’s legendary “Halloween”. Still this is also not to say that Director Salva doesn’t already have an advantage in dressing his psychos in clown costumes, especially as there is something undeniably creepy about clowns and by playing on such existing fears, Salva doesn’t exactly have to work hard to generate the scares even though it’s a tactic which has been used numerous times before in horror, none of these films have yet to be any good and I was curious to see if this film would be the one which finally got it right…it wasn’t.

The clown make up is surprisingly pretty ordinary even when the original clowns have been replaced with the escaped lunatics, they somehow still manage to copy their victims make up perfectly, with Salva resisting the urge to give them any kind of twisted make up, which only helps to keep them more generally creepy as he opts instead to play on most peoples natural fears instead of trying to make them more threatening.  Bizarrely once they are disguised as the clowns they suddenly start taking on the same mannerisms of the clowns they killed, even to the point were during one of the deaths one of the clowns (played by Tree. I kid you not this is actually the guys name) starts performing a balloon animal routine??

The gore on offer here is minimal to say the least with broken necks being the order of the day, but not just broken but heads twisted a full 180! Sadly though with most of the violence being directed against the clowns, it inadvertently means that it frequently comes off as just bad slapstick. Needless to say this was a film sorely in need of a few good kills which sadly never happen, as Salva instead chooses to spend most of the film playing hide and seek with his cast, though with the boys being so blasé about the fact that three crazed maniacs are trying to kill them, it frequently kills what little tension Salva manages to generate, even if he does manage to effectively use a strobe lighting effect to track one of the clowns as he lurks in the dark behind Geoffrey.

Sadly what really hangs over my opinion of this film the most is not what we see on the screen, but what was happening behind the scenes, as it was later revealed during the release of Salva’s “Powder” that he had sexually molested Winters with Salva even more sickeningly having videotaped the whole thing. Salva would as a result be sentenced to three years in prison of which he would serve 15 months before being paroled with Salva registering as a sex offender. Needless to say you have to question if the “Jeepers Creepers” films would have been so popular with the movie going masses had they known this.

Ultimately off screen scandals aside, this film struggles to live up to its strong setup, with the lacks of kills and horrible lead characters only further making it a tedious viewing experience, especially with the clowns being so painfully underused, it’s one of the few 80’s slashers I would like to see remade, only with a focus on correcting these issues, as it has the raw materials there, it’s just Salva never truly uses them to their maximum potential. The search for an effective clown slasher continues.
Posted by Elwood Jones at 14:47