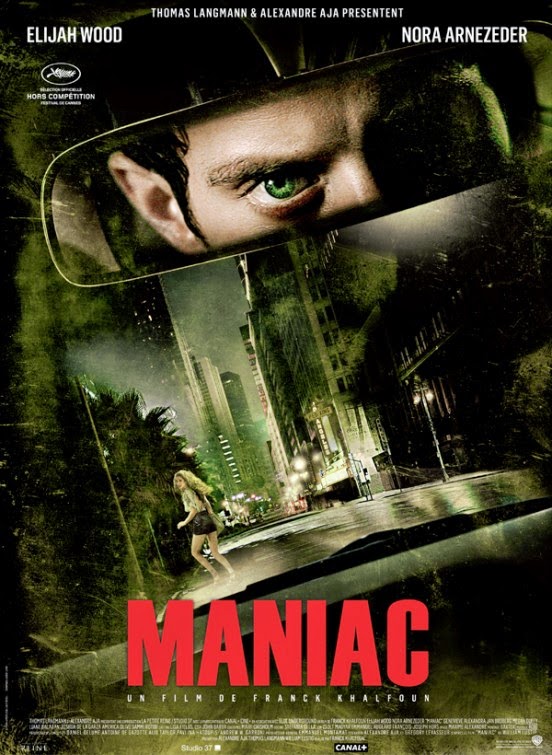 
Plot: Frank (Wood) by day works restoring and selling mannequins, while at night he trawls the streets looking for victims to help him quell his violent urges as he is constantly tormented by the voices in his head.


Review: Usually the news of yet another iconic horror film being given the remake treatment is enough to bring cries of despair from the horror community (let alone myself), mainly because they have tendency to be just plain awful! Frequently these rushed out efforts try to play off the legacy of their namesakes in hopes of guaranteed box office return and more than often minus any of the scares. The exception to this rule though has been with Alexandre Aja, who despite exploding onto the scene with “Switchblade Romance” (aka Haute Tension / High Tension depending were in the world you are)  has since then been responsible for some of the best films to come out of the current horror remake trend, as he has helmed remakes of The Hills Have Eyes, Mirrors and Piranha and here he turns his attention to William Lustig’s cult slasher. Despite teaming up once more with his long term writing partner Gregory Levasseur, this time he hands over the directorial reigns to Franck Khalfoun for his most high profile film to date after his ho-hum debut “P2” and the direct to DVD “Wrong Turn at Tahoe” which he clearly has learned from as this film is very much a different beast entirely.


First off I should highlight that I won’t in this review try and draw comparisions between this film and the 1980 original which like so many of Lustig’s films has a very dedicated fan base many of whom dismissed the film on its release which is kind of a shame as both films have their own merits yet at the same time they are very different beasts.


Shot almost entirely from the Frank’s POV the film is heavily reminiscent of “Peeping Tom” with Frank only being seen occasionally via reflections or out of body hallucinations. It is from the opening were we see Frank in his van stalking his next victim that we are immediately given an insight into his fractured and tortured psyche as he mutters to himself and provides his own commentary as he watches his victim, before we ultimately follow Frank as he slowly moves in for the kill. Frank though is not content to just stalk and kill young women though, as he also enjoys scalping his victims and later transferring their hair onto one of his numerous mannequins which in Frank’s mind gives them the personality of his victims.


Here Khalfoun is not content to give us yet another run of the mill slasher as the focus is kept completely with Frank throughout the film and in doing so ensures that he is fully able to explore the complex psyche of Frank, whose issues are certainly deep rooted to say the least as we get frequent flashbacks to Frank’s childhood in particular his mother moonlighting as a prostitute, scenes hauntingly shot with the young Frank being forced to watch grotesque sexual scenes happening infront of him, while clearly not being able to configure in his young mind what is actually. Combined with the frequently nervous tone which Frank speaks with it is a strange sense of sympathy that Frank invokes in the audience even though we are watching him commit some truly hideous acts and its this conflict of emotions we feel for this character that Khalfoun frequently plays with over the course of the film as he shows us Frank’s tortured psyche before showing him committing some hideous act ensuring that we are never sure how to feel about him.


Speaking of these acts, unsurprising for any film which Alexandre Aja is involved with it is unquestionably violent in places with scalping being the main order of the day and while certainly toned down than some of Aja's previous films, he it is unquestionably effective when it is used and never seemingly for the sake of easy shocks as Khalfoun is careful to not loose the mood of the film for the sake of adding more gore, instead preferring to use intense bursts rather than prolonged violence and only allowing himself to truly go overboard for the finale as Frank suffers a full mental breakdown escalating in a suitably gory climax.

The real strength of this film though lies in the casting of Elijah Wood who gives us his second turn as a psycho after previously playing the mute cannibal Kevin in “Sin City” and here he continues his surprising talent for playing serial killers as he continues to prove himself more than a one trick pony considering how many people still see him as Frodo. Here though that role seems like a distant memory as he tackles possibly one of his most complex roles to date and while he might seem like the last person who could play a convincing psycho he soon blows any doubts out of the water within minutes of the film starting, as he is effortless flows between Frank’s many frames of mind.


The other standout aspect here is the synth heavy soundtrack by French composer Rob and which instantly brought to mind Cliff Martinez score for “Drive” with undertones of “A  Clockwork Orange” and it really suits the film which after all is a (loose) remake of an 80’s film.  Like so many of John Carpenter’s films here as well the film is framed by its soundtrack, moving from softly haunting during the stalking sequence, while fully coming to the front during the climax as Frank truly looses all control he may have had over his murderous urges
Yet another film to add to the argument for remakes, this is unquestionably exciting film making and even without the link to the original film, this film more than stands on its own merits, especially with Wood providing one of his most memorable performances to date. No matter what your stance on the unrelenting stream of remakes might be, this is certainly one of the better films to come out of this trend.
Posted by Elwood Jones at 14:51