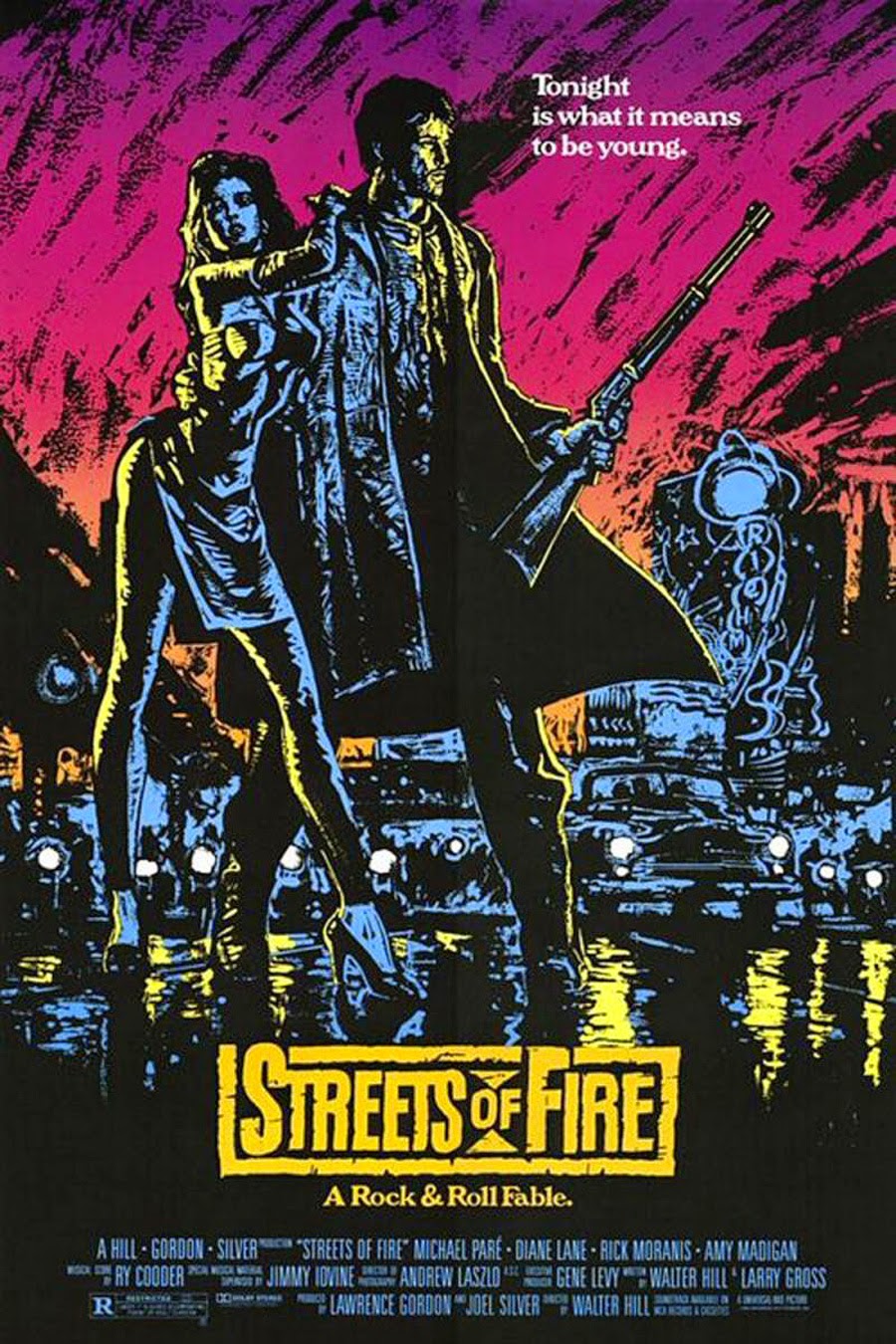 
Plot: When Tom’s (Pare) ex-girlfriend and singer Ellen (Lane) is kidnapped by the biker gang the Bombers, he sets out to get her back putting him on a collision course with Raven (Dafoe) the leader of the Bombers


Review: While director Walter Hill will no doubt always be best remembered for “The Warriors”, alongside Joe Dante he has probably one of the most underrated back catalogues of any director, which is something this film only further emphasises. This film also is another example of what happens when a director is given free reign to make exactly the film as we’ve seen with the likes of Darren Aronofsky’s “The Fountain” and Zack Snyder’s “Sucker Punch” and well pretty much every movie that Quentin Tarantino has made it would seem.


So for Hill these loves would seemingly be fast cars, motorcycles, wisecracking tough guys, neon signs and brawling  in the street, while mixing up elements of 1950’s Americana within an 80’s setting with the results being certainly interesting to say the least, much like the shooting style which Hill brings to the film. Shot like a neo-noir while breaking off frequently on music video style tangents he also includes extended performance footage throughout the film, often seemingly dropped in at random or so it would certainly seem at the points these moments appear throughout the film making it almost a forerunner to “Sin City” only with added music video elements.


Much like “The Warriors” this film pretty seems to be set in its own enclosed world, were the police don’t seem to care to much about spontaneous street brawls or even bikers randomly walking into a concert and kidnapping the lead singer. This is unquestionably a world which runs to Hill’s unique set of rules. Perhaps though because the film is played with such a sense of fun that these frequently random things are never questioned. Still as random as the film might be with its shooting style (never mind the plotting) it is certainly hard to fault the unique mixure of eclectic characters that Hill populates his unnamed city with, with Tom making for a great lead. A soldier of fortune, he is essentially a stone cold badass who is mere minutes in town before he is shown throwing bikers through a diner window. Thankfully Pare knows his way around a one liner which helps to separate him from the line of disposable one shot action heroes that 80’s cinema was littered with, only making it more of a shame that Hill never got to make the intended trilogy he had planned for his character, with sequels being set in snow and desert settings. Ultimately though the closest we have got to a sequel is the unofficial one “Road to Hell” via cult favourite Albert Pyun which saw Pare reprising the role of Cody.


Its not only the unique setting which Hill plays around here, as he plays actors against type a he memorably makes Rick Moranis a foul mouthed tough guy wannabe, rather than having him rerun through his usual bumbling goofball style of characters and while it’s the polar opposite than what we’ve grown used to seeing him play it is a risk which plays off, especially as Moranis brings the right amount of sleaze as he manager and current boyfriend of Ellen who frequently seems to care more about getting his investment and scoring points off Cody than he does about Ellen. The real standout though is the tomboy ex-soldier and mechanic McCoy a part fought for by Madigan who despite originally being brought in to read for the role of Cody’s sister Reva (eventually played by Valenburgh) ended up fighting for the role of McCoy which Hill ended up changing from being the more traditional portly sidekick to her current form here which ultimately pays off as Madigan makes for the perfect counter to Pare’s Cody with the two making such a fun team it only makes it only the more sadder that the intended trilogy never happened.


When it comes to filling the bad guy quota Dafoe makes for a suitably creepy villain which seems to always be the way with these early roles, were he generally just seemed to be creepy and constantly giving toothy shark like grins which is pretty much what we get here only with the added bonus of PVC overalls which hardly seem to be the most biker of outfits and perhaps more of a kinky redneck look, yet for some reason it seems to strangely work here, even if the rest of the Bombers look like they have been torn straight out of the “The Wild One”. As Raven though he frequently rides the fringe of psychosis, though constantly seems to be able to keep things under control until the finale were he finally lets loose challenging Cody to a sledgehammer street fight.  This finale though does ultimately feel slightly anticlimactic when compared to the rest of the film, maybe due to studio tinkering guiding it more towards a more ratings friendly ending, rather than the ending that Hill had planned. Unquestionably though the journey which Hill takes us on is such a fun one that it’s easy to overlook, especially when  he once again crafts some great set pieces including Cody leading an attack on the Bombers clubhouse, were he gets to showcase his crack shot skills to great effect.

Despite being a box office flop on its release this film has since gone onto become a cult favourite and its easy to understand why, especially as its such a fun and fast paced film with some fun retro dialogue which perfectly matches this head on collision of styles and ideas. Unquestionably this is a unique film to say the least and like so many film in Hill's back catalogue it is certainly worth hunting down, if only to check out Dafoe in PVC overalls!

Part of "Forgotten Films" 1984 Blogathon, so why not check out the site for more 80's madness
Posted by Elwood Jones at 16:03