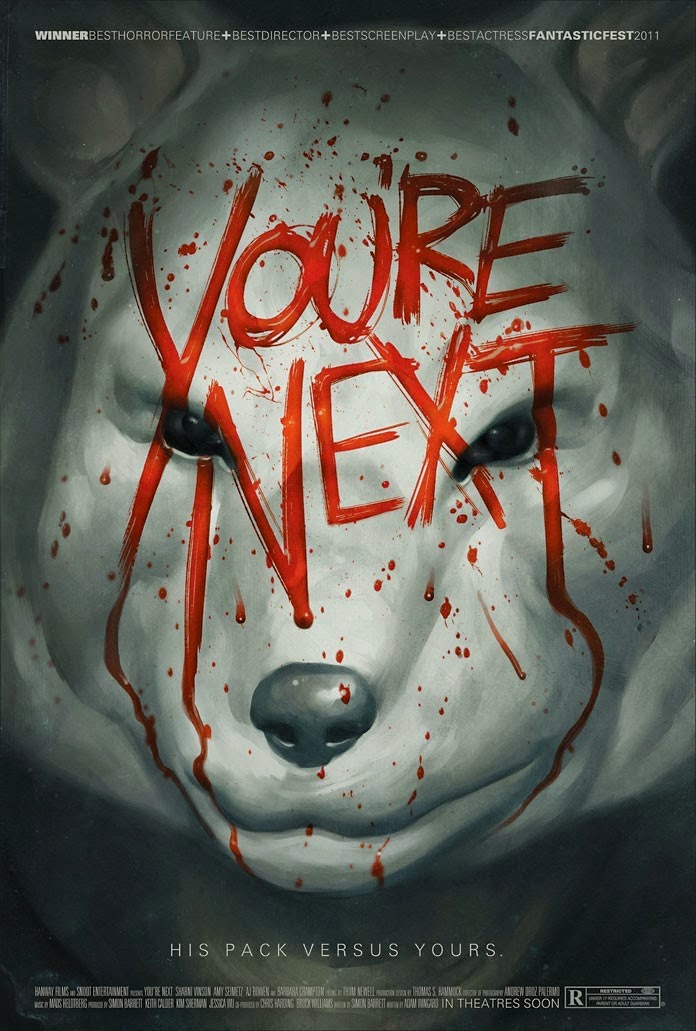 
Plot: The assorted members of the Davidson family brought together for the wedding anniversary of their parents Aubrey (Crampton) and Paul (Moran). A reunion which is soon cut short when the family come under attack from a group of animal masked killers.


Review: Despite being unleashed on the festival circuit in 2011, it took another two years for this film to finally get a proper release, which since then has only seen it further the growing influence of the “Mumblegore” genre. An offshoot of the New York mumblecore productions, this Los Angeles based style of film making is currently shaking up the honestly overworked Horror genre, with a style based around micro budgets, cerebral plotting and minimal studio interference. It is also a sub-genre which so far has produced the likes of Ti West’s “House of the Devil” and E.L. Katz’s “Cheap Thrills”.


Despite being part of a genre so closely linked to mumblecore, any concerns about yuppie kids trying to remake "Clerks" and instead rambling away on random topics while the film appears to have been made up on the fly, should fear not as despite the fancy  sub-genre title this film still fits into the standard slasher format, with the main difference being that the budget its being shot with is well below what your standard horror film has to play with, which is unquestionably the case here as director Wingard made the film for a paltry  One million dollars.


Despite the limited budget this film is certainly not lacking in style or creativity, with the setting kept to the manor house location for the most part, with only a brief diversion to a neighbouring property to keep the action fresh aswell as to enforce the sense of isolation, which is only furthered by the pitch black rural setting. At the same time Wingard is clearly not trying to reinvent the wheel as the film soon drops into the standard stalk and slash blueprint. However it is at the moment that the film kicks into this gear with a surprise crossbow attack by our animal masked killers that the Wingard pulls the rug from under our feet, as he unleashes his surprise as rather than let the process of elimination slowly reveal who will be the final girl here Wingard reveals her straight away, as mere minuites after the killers have claimed their first victim Erin (Vinson) leaps into action and proving that she has no intentions to waiting until she forfills the needed criteria of the final girl.


Erin really is a major selling point here outside of the cool look the animal masked killers have and who manage to break the worrying trend of cool masks = awful film (see: The Purge, The Strangers). Thankfully Erin’s quick reactions to the situation are explained away by the reveal that she grew up with a survivalist father who taught her skills which she certainly puts to good use here, along with a real knack for improvising on the fly as she frequently proves over the course of the film.


The rest of the family though it has to be said are pretty much there to add to the healthy body count, as they spend the film running around aimlessly and find ever more unique ways to fall victim to the killers, who like Erin equally don’t lack creativity as they set up several ingenious traps which caught even an established genre fan like myself by surprise. The fact that they don’t talk for the most part of the film equally adds to the tension which surrounds them while bringing to mind memories of the finale of “The Wicker Man”. At the same time it is their single minded determination which really makes them quite chilling to watch for the first half of the film while perhaps losing their edge once their plans begin to fall apart and they start begin talking amongst themselves more.


Sadly the rest of the cast are largely forgettable with no real difference between any of them, which makes it hard to care about losing any of them, especially when they are so interchangeable from each other and really only there to add to the body count which honestly is the sole advantage of having some of them around. Ultimately it’s hard to feel anything for most of the characters when we lose one of them with perhaps a couple of exceptions, which provoke a reaction more than joy at another slain yuppie.


Thankfully though the kills make up for the disposable nature of the these characters and here we certainly get to a lot of creativity from the opening crossbow attack on the family dinner party things steadily escalate with the killers soon proving themselves to a resourceful bunch as they frequently pull out some great surprise kills while many are delivered with sense of automation as the killers go about their work with the animal masks only adding to the chills. Thanks to Erin’s unique skill set the kill streak also goes both ways as she shows herself not only handy in a fight, but with her own cunning line of booby traps, from window spikes through to the much talked about blender to the head she soon makes it a very bad day to be a killer.

Perhaps one of the fresher horror movies of recent times, if perhaps down to the fact that its not distracting itself with the paranormal, zombies or one of the other overwork sub-genres and instead gives us a back to basics slasher with a few new twists. If this means that the future of horror lies in the Mumblegore genre, it is hard to say from this sole example but certainly more promising than anything currently in the mainstream.